1870    Kirkley Cliff Terrace, as the main block of Kirkley Cliff it was known at the time, was the final phase of the South Lowestoft development project of Samuel Morton Peto and his architect John Louth Clemence and was completed in 1870.

John Clemence had already been responsible for the design of The Esplanade, Marine Parade, Victoria Terrace and Wellington Esplanade as well as a number of individual buildings in the town including the Town Hall, St. John's Church and Lowestoft Hospital. 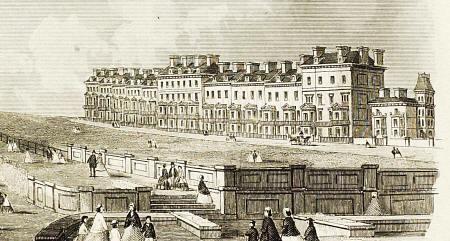 1871    At the census of 1871 no. 10 was unoccupied as were 2, 3, 7 and 18 in the same block. It was perhaps because of this no. 10, the only double size unit in the block, was split into two units, 10 and 10a,  in the hope of it being more attractive to occupiers although with a central staircase it is unknown quite how this was achieved.

1881    By the census of 1881 no. 10 was still unoccupied but 10a was occupied by Blanche Fonnereau, aged 41, who described herself as 'the wife of a JP' although there is no Mr. Fonnereau listed there (there was a Suffolk County Magistrate T. N. Fonnereau at Christchurch Park, Ipswich).

She is shown as having five daughters aged from 7 to 16 years and a 5 year old son, and she had the help of resident butler, cook, two housemaids and a nursemaid.

1891    By 1891 both 10 and 10a were occupied by the same family although they were still listed as two units. The head of the family is shown as Sydney Leamon, 39 years, who is described as a Boarding House Proprietor living with his twin sister Fanny, with one boarder Rosa Copeman 'of private means' and three resident servants, a cook, housemaid and footman.

1901    By the 1901 census the occupancy had changed yet again and the Lucas family were in residence. Col. Alfred George Lucas* and his wife Edith, daughters Sybil and Muriel, and sons Wilfred and Alfred comprised the household with a resident staff of butler, cook, lady's maid, nurse, housemaid, under-housemaid, kitchen-maid and footman.

*Col. Lucas is not listed as resident at no. 10 on the 1901 census return although Edith is described as the wife of the head of the household. It may have been that his military duties detained him elsewhere for that particular date.

Col. Alfred George Lucas was the son of Charles Lucas, one of the Lucas Brothers, a nationally known building firm with local roots responsible for the majority of the Lowestoft development projects of the second half of the 19th century and many others around the country.

Col. Lucas commanded 17th Suffolk Rifle Volunteers raised almost entirely from the Lucas Brothers workforce. He also served twice as Lowestoft's Mayor, in 1895-6 and in 1897-8, was a Justice of the Peace and in 1909 was appointed Sheriff of Suffolk. The family had moved to Hobland Hall in Bradwell by 1911 where he described himself as a brewer.

1911    At the 1911 census no. 10 was called 'Cliffside', a private hotel run by Robert George Copling with his wife Sarah. There were two resident boarders, Clara Herring and Hannah Forrest, and two servants, a housemaid and a house-boy.

1914    Kelly's Lowestoft Directory for 1914/15 records no. 10 with the same owner and it must have been shortly after then that the building came to the attention of the curate of St. John's, Rev. F. W. Emms (the founder of the Lord Kitchener Memorial Holiday Home at that address), opened in 1919 and celebrating 100 years in the same premises this year.

Note:    Local folklore has it that no. 10 was once in the ownership of the Colman (Norwich Mustard) family but there is no evidence to show that any part of Kirkley Cliff Terrace was ever thus. In fact there is firm evidence to the contrary as the then most senior member of the firm, Jeremiah James Colman, Liberal MP for Norwich is recorded as living not in Kirkley Cliff but at 20 The Esplanade, Lowestoft.

There was a 'Coleman' or 'Colman' (the spelling varies) living in 13 Kirkley Cliff for a while but he was a wood machinist, not a mustard maker.